I grew up near San Diego, California and spent my early years obsessively sportfishing with my dad. When the tuna were in, we’d often book trips on “party boats” out of San Diego which consist of about 30 or so guys drinking a lot of beer and fishing nonstop for 16 hours in a day.  It had been a long while since I’d thrown a sardine on a kelp patty, and so last August, my dad and I along with my childhood best friend Nathan Thiele, and my buddy Frank Banks set out to sea on a 1.5 day trip into Mexican waters about the f/v Legend out of Seaforth Landing. The trip ended up being one of the best party boat experiences of my life with nonstop Dorado, Yellowtail, and Bluefin Tuna flying over the rail. My freezer is still packed with filets. 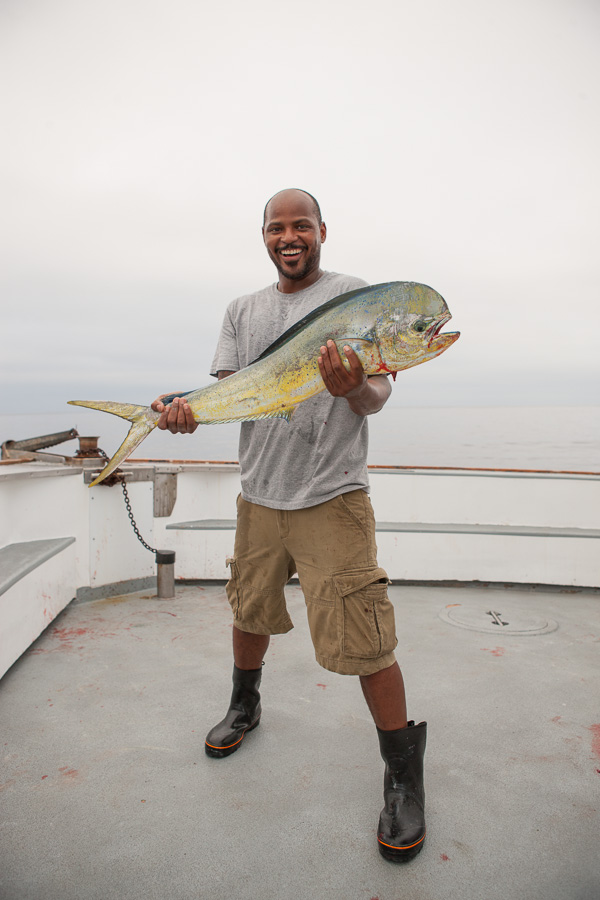 Frank just launched an iphone app called FISHFEED, that I think is going to revolutionize how fishermen get their information and share photos of their catch with friends. My mission was not only to catch a ton of fish, hang with my dad and reunite with old friends, but to document a taste of what fishing in San Diego is all about for the release of the new FishFeed app.  If you like Instagram, and you are into fishing, please download this app so we can all nerd out on our fishing pictures together. FishFeed is free, you can even upload video clips.  Download it here

The following photos are excerpts from the trip: 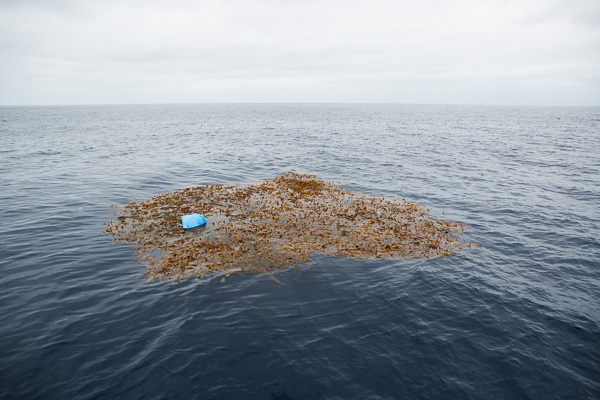 Sliding up on a big kelp patty. photo: Corey Arnold

Fishing for Mahi Mahi, Bluefin Tuna, and Yellowtail works like this:  This time of year, we were fishing around 50 miles offshore in Mexican waters. You basically troll around at 8 knots or so in search of kelp patties.  Patties are large rafts of dead kelp that have broken away from inshore waters.  Beneath these floating shelters may live a who school of fish that are following warm water currents heading North.  Its pretty exciting to slide up to a patty, and throw a live bait in the water.  You never know what might be down there. 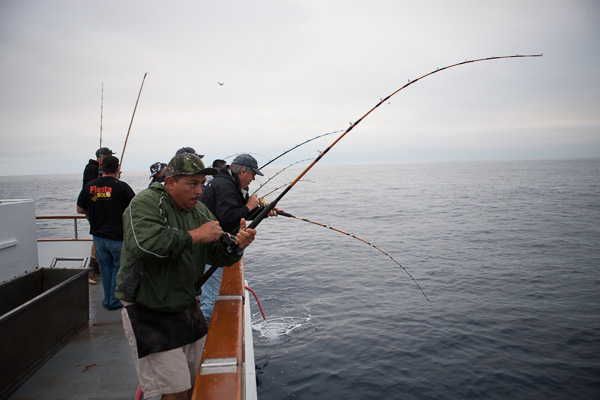 Everyone hooked up at once, photo: Corey Arnold

On our first patty, everyone on the boat hooked up at once! It was amazing.  Mahi and Yellowtail bloodied the decks in every direction.  The rest of the day went like this.  Every patty we stopped on held fish.  So many, that we would only stay on patties that held larger fish. 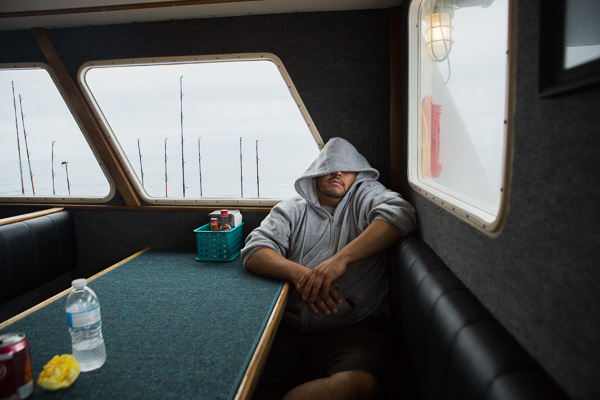 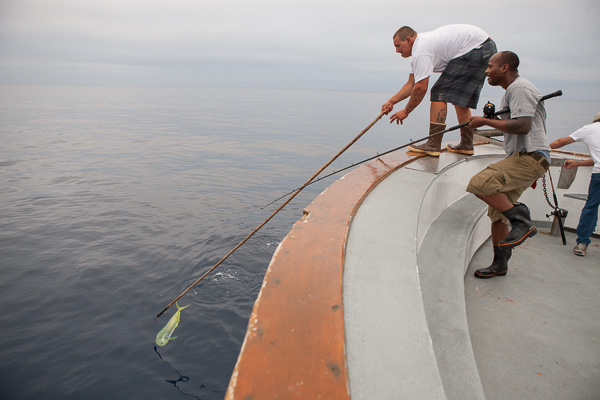 Frank Banks about to land a huge Mahi and slap it on FishFeed. photo" Corey Arnold 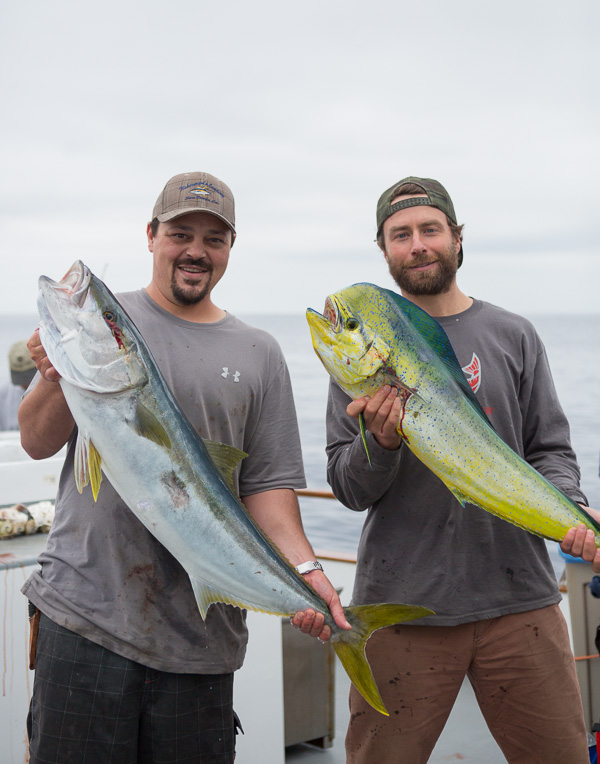 Nice to reunite with my fishing buddy, Nathan Thiele.  We hadn’t fished together since the 80’s.

Similarly great to reunite on a boat with my dad.

This guy was some kind of Mustache champion.  He also could not stop catching the biggest fish on the boat. 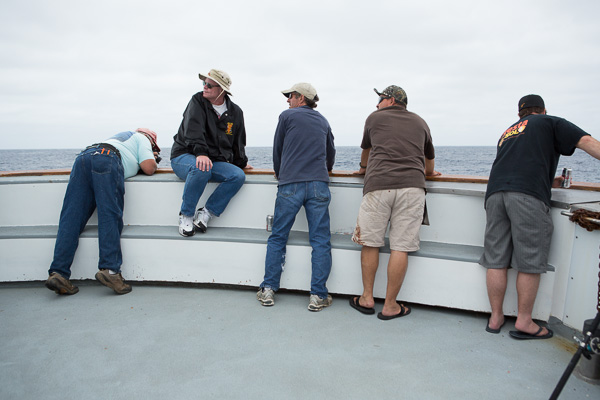 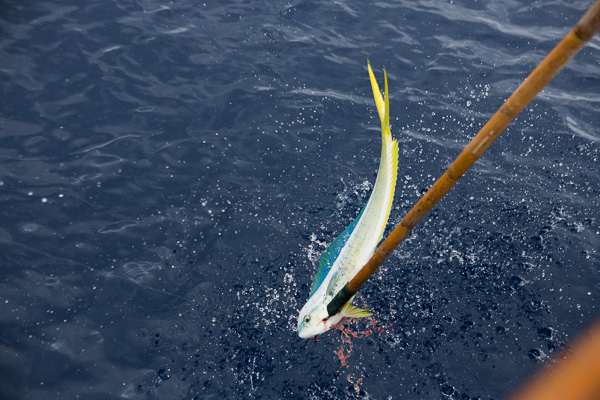 Dolphin being a Dolphin in the distance, photo: Corey Arnold 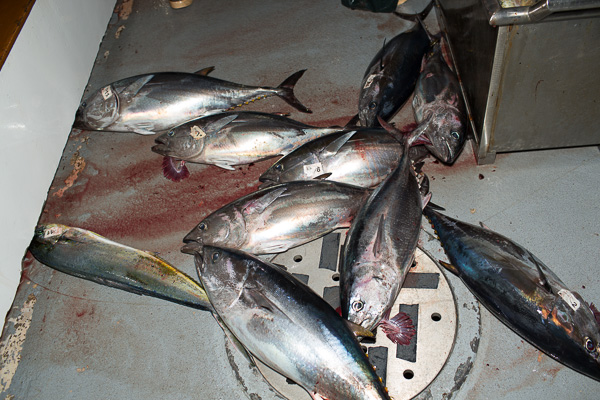 Sometime after dark we found the coveted Bluefin Tuna hangout and Ahi started flying over the rail.  I landed two of them which was icing on the cake. 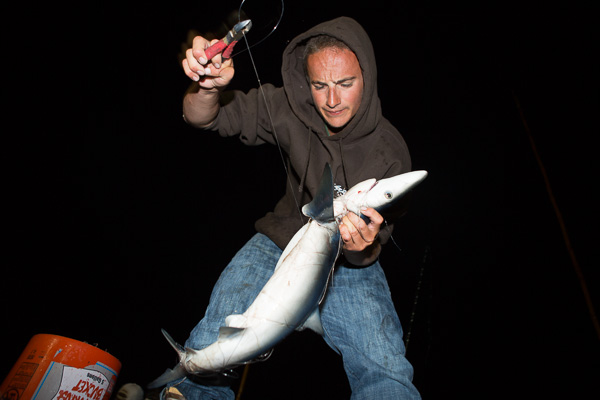 Don’t be alarmed, this shark made it back in the water alive.  Those things are mighty resilient. 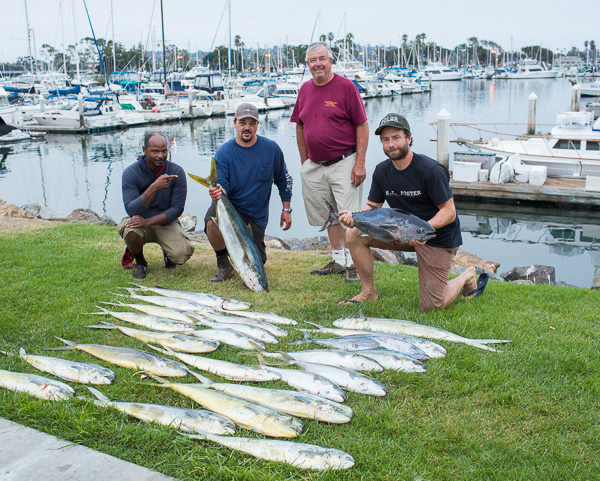 Nathan and I had 27 fish between just the two of us. Such an amazing trip.  Thanks to the fine captain and crew of the f/v Legend and Frank at FishFeed for sponsoring the trip.  We’ll be back next year for sure!