I assumed that my recent interview in Ireland’s largest newspaper, the Irish Times was going to be a simple story about why I was in Ireland for the Irish Skipper Expo doing a slideshow presentation about my life as a commercial fisherman and photographer in Alaska, and my recent tour of 8 European countries photographing commercial fishermen around the EU.  Instead,  the editors that shaped the article falsely quoted me in a headline that thrusts my misquoted opinion into sydication around the blogosphere.   The headline reads”  EU fisheries policy an attempt to ‘wipe out’ coastal fishing communities.  This post is my rebuttal to a poorly titled interview that involves me in a larger debate  in which my (falsely quoted) opinion should not be the centerpiece of the article as I’m clearly not an expert on European fishing politics. 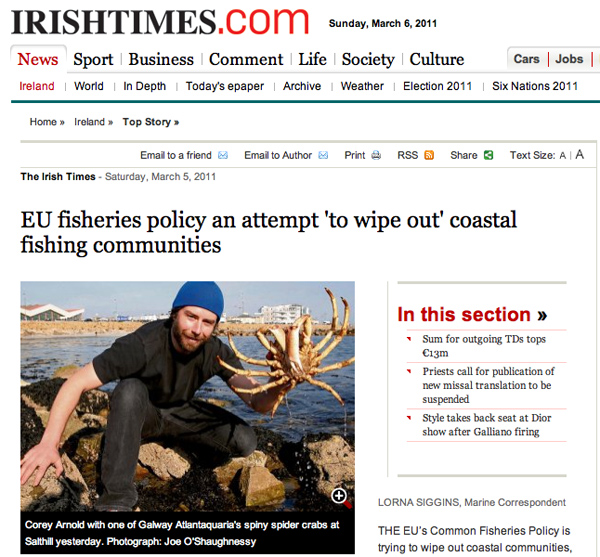 1. The headline is a dramatic exaggeration.  I’m smiling and holding a crab in the picture.  Why should the headline be about fish politics? I’m here in Ireland to show my photography, not preach my opinion on fisheries politics.  I would have never said that the EU common fisheries policy is trying to “wipe out” coastal fishing communities.  I would just never say something like that.  Coastal communities are surely not benefitting from the current policy but I do not believe that anyone is trying to “wipe out” communities. It’s more complicated then that. Unfortunately, no one that I’ve met in Europe is happy with the current EU fishing policy.   In the interview, I had only  given examples of how I thought it would be beneficial to the coastal communities if there were, for example: less quota restrictions on small inshore mackerel jiggers as the amount of fish caught by small inshore jiggers is minuscule compared to that of the discarded fish of the larger vessels. From my limited experience travelling in Ireland, the Mackerel jigging community in Donegal I joined seemed to me like an example of a clean and healthy small scale fishery.

2. “Fishing Dude”  Who’s quotes are that?  When has anyone ever called me a “fishing dude”?

3.  I never said that I found some of “the most dramatic examples” of the threat to small boat fishing in Scotland and Ireland.  I said that I experienced the highest level of worry about their future,  from fishing communities in Ireland and Scotland.  Coastal communities are suffering all around Europe, but people here seem to be even more concerned then the rest.

4. I never said that EU fisheries policy makes it “almost impossible” for small boats.  I do think that the policy is not benefiting small boats, but I’m just not that dramatic about how I express myself.  Small boat fishermen are generally less united then the larger fishing companies, and therefore probably have less influence on shaping policy for their benefit, as is the case the world over.  I do not know the details of EU fishing policy, I only know what I’ve learned from talking to fishermen around Europe and my photography is not politically motivated, therefore this is not an argument for me.

5. The quote ” They barely get enough quota to survive, compared to the much larger vessels which get most of the quotas and can discard up to 50 percent of their catch”.  Everyone agrees that fish dumping due to the selective quota system is one of the biggest problems facing the fishing industry.  If there were measures to taken to control dumping, and allow fishermen to actually sell their bycatch, then its possible that the fishermen could make more money, land more fish, yet kill less fish overall.  More quota could then be allocated to the inshore to medium sized boats and everybody wins. This is my simplified opinion of a much more complicated argument and I feel that the article should have expressed more of my hopeful optimism then this doomsday language that it meant to attract readers to dramatic headlines.

6. I mentioned the success of the observer program in Alaska and the lack of details might be confusing.  100 percent of Alaska’s larger trawlers have scientific observers on board to collect data on the fish being captured.  Obviously fishermen do not want cops aboard their boats watching their every move, but in Alaska, these observers have a fairly harmonious relationship with the fishermen they live with on a daily basis. Observers are primarily on board to gather data that would benefit the future of the fish stocks.   It might also help prevent the dumping of undersized fish… a practice which is driven by market forces.  Everyone does it in order to compete and deliver larger, quality fish.  So, I think an observer program, at least on the largest trawlers such as in Alaska, could be an idea explore.

In conclusion, I’m a photographer with a love of commercial fishing, fish, and the culture of people who make their living from the sea.  My pictures are motivated by a desire to share this love of fishing with the world, and to hopefully inspire, educate, and provide a historical record of this period in fishing history worldwide.  I’m an advocate for sustainable fishing practices, but by no means consider myself an expert on the matter nor and expert on the fishing policy of foreign nations.