I’m very excited to announce the release of my first photography monograph published by Nazraeli Press. FISH-WORK The Bering Sea is an 80 page, large format book of images from my seven years working as a commercial fisherman in the Bering Sea waters of Alaska.  It was an honor to work with the very kind Chris Pichler (founder of Nazraeli Press) on the design and layout of the book.  Nazraeli has long been one of my favorite photography book publishers and has in his catalogue some amazing printed matter by many of my favorites: Todd Hido, Gus Van Sant, Alesssandra Sanguinetti, Ralph Eugene Meatyard, Daido Moriyama, Michael Kenna, and Mark Steinmetz.

You can pre-order SIGNED copies direct from my studio in the new Fish-Workshop online.  The first edition is limited to only 1000 copies, so I’m not sure how long they will last! Books will be shipping sometime in late December. Below is the press release with a bit more info: 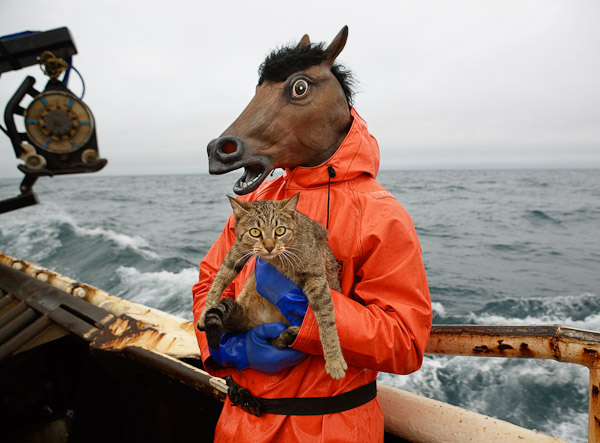 Spread from Fish-Work: The Bering Sea

The photographs in “Fish-Work: The Bering Sea” capture moments from Arnold’s grueling retreats as a crew member aboard a fishing boat to the Bering Sea. With scenes of boat life so vivid that some shots can induce fear or seasickness, the artist’s perspective also reveals the tender soulfulness of a fisherman’s extended life at sea. His skillful compositions depict the simultaneous bravery, toil, humor and gumption that “fish-work” demands. Yet the series also illuminates the aesthetic sublimity that can only be experienced, ultimately, by those willing to risk their lives where the sea breaks its back. Having survived several seasons afloat these icy and unforgiving waters, we are lucky that Arnold has taken time to document his artistic impressions of this rare lifestyle and extended us a vicarious glimpse.

A graduate of the Academy of Art in San Francisco, Corey Arnold lives and works in Portland, and now runs a commercial salmon fishing boat in Bristol Bay, Alaska.  His work has been exhibited worldwide.  Recent publications featuring Arnold’s work include the Juxtapoz Photo Book, Esquire, The Sunday Telegraph, Rolling Stone, Outside, The Paris Review, The Collector’s Guide to Emerging Art Photography and PDN’s 30.

“Fish-Work: The Bering Sea” is published by Nazraeli Press in conjunction with Charles A. Hartman Fine Art. It is printed in an oversized format in a first edition of 1,000 casebound copies.